Doing mathematics requires a combination of intuition and rigour. Intuition is the source of ideas and conjectures. Proofs need to be rigorous, while at the same time avoiding excessive detail, which would destroy readability. That is why we need intuition even to read a proof, let alone to conceive the theorem in the first place. How can we capture intuition in a formal proof?

Our example, the mean value theorem, is an elementary fact about the differential calculus:

Before we give a strict proof of this theorem, which is one of the most important theorems in the differential calculus, it will be well to point out its obvious geometrical meaning. This is simply that, if the curve $APB$ has a tangent at all points of its length, then there must be a point, such as $P$, where the tangent is parallel to $AB$. For $\phi’(\xi)$ is the tangent of the angle which the tangent at $P$ makes with $OX$, and $(\phi(b) - \phi(a))/(b - a)$ the tangent of the angle which $AB$ makes with $OX$. 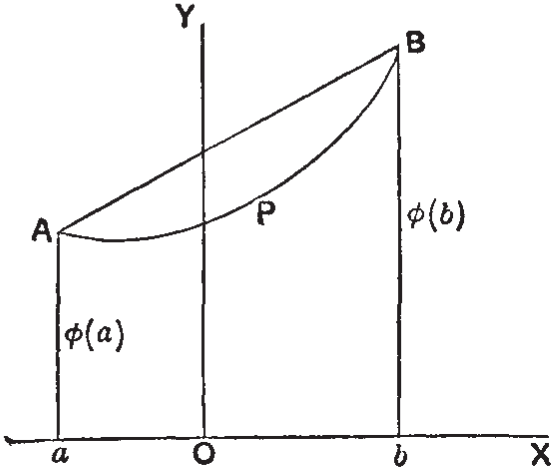 It is easy to give a strict proof. Consider the function

which vanishes when $x = a$ and $x = b$. It follows from [Rolle’s Theorem] that there is a value $\xi$ for which its derivative vanishes. But this derivative is

which proves the theorem.

The proof in the Isabelle/HOL library is slightly different, defining a function f that does not actually vanish (no need for that) and its derivative has the opposite sign. Nevertheless, the formal proof contains essentially the same application of Rolle’s theorem.

The MVT formalised in Isabelle/HOL

The Isabelle proof rewards closer inspection. The theorem’s assumptions include $a<b$ and the continuity and differentiability conditions on $\phi$. If you recall the earlier post on undefined values, you’ll understand why differentiability is expressed by a relation that actually names the derivative as $\phi’$. The conclusion of the theorem asserts that we “obtain” some $\xi$ satisfying the required properties. The obtains keyword is one way to express an existential conclusion.

In the proof we see the f being defined for use with Rolle’s theorem, whose conditions are then proved. The conclusion follows by simple algebra. Our exposition is not as clear as Hardy’s, but we see how f is defined and what its crucial properites are. This proof, being machine-checked, is rigorous, while retaining a bit of intuition: we don’t have to spell out any more detail.

Looking closer at the proof justifications, we see multiple uses of the intro method to prove differentiability and continuity of f. The smt justification was generated automatically by Sledgehammer.

GH Hardy’s textbook Pure Mathematics is aimed at first-year mathematics undergraduates. It covers analysis up to “the general theory of the logarithmic, exponential, and circular functions”. Hardy’s Preface states “I regard the book as being really elementary.” First published in 1908, it has gone through ten editions and is still in print.

The file containing the MVT example is available to download.